Arguments for the new format
The new firmware version naming allows a clear and easy comparison between the different versions and their implemented features (PCD type specific) and bug fixes.
Questions like "Why is the Alarming functionality of the PCD3 Web Server implemented in firmware version $31 but not in version 031? - They both do have the same number..." should be past (however, if you're interested in the answer, please refer to FAQ100176)

Format description
The new firmware version name does consist of a major version, a branch version and a minor version separated by a dot (.).
Note that the prefix characters “0”, “$” or “#” are no longer used in this notation. 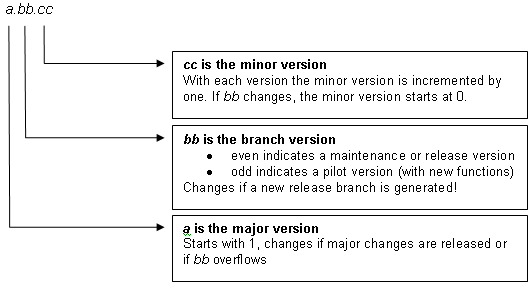 Concerned systems
The new firmware version format is applied to the systems based on Saia PCD® COSinus firmware (Classic and xx7). These are

While the firmware names for the MB Panels and PCD1.M2xxx do have this format from beginning, it was introduced on the PCD3 and PCD2.M480 systems with the firmware version after 03B.

Version flow example
Below an example for a version flow. If e.g. a bug is corrected in the version 1.06.01, also version 1.07.02 and all following 1.06.xx versions do/will have this correction implemented. 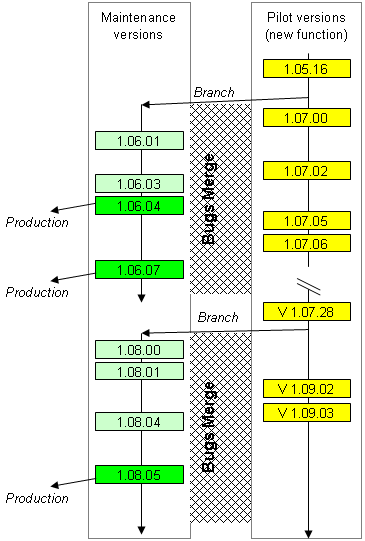 Compatibility with PG5
The new firmware names are fully supported by PG5 V 1.4.200:

Previous versions of PG5 will only show the first three digits of the firmware version (e.g. “106” instead of “1.06.08”). The full firmware version can always be read by displaying byte F0F0 in the “Online Debugger” (type DYF0F0 ):