After the update of Java to Java version 7, (update 6 or 7) a Java warning message is shown on my PC browser when accessing a web page stored on the PCD.

Web pages stored on the PCD which where displayed without problems on the web-browser of the PC does show a Java warning message after the update of Java to the Java version 7, (update 6 or 7).

Symptom
If you want to display a web page on the browser of the PC then the following warning is shown on the screen: 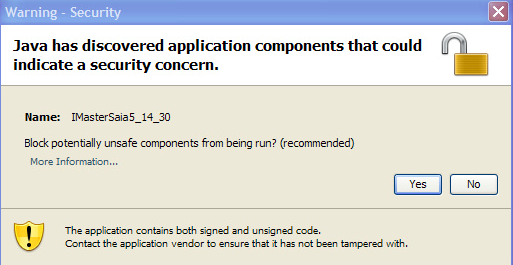 Because there are a lot of the same warnings that appear, you have the impression that the click to Yes or No has no effect but in fact there is another identical message that will appear afterwards. There will be about 30 of these messages. This warning will appear independent of the version of the jar-file that is used in the project.

Solution for applications where the java applet IMasterSaia5_15_02.jar or IMasterXX7_5_15_02.jar is used:
Do download the IMasterSaia5_15_02.jar version 5.15.0229 (with date from the 16.09.2013) stored on our homepage, section PG5 2.0/S-Web editor and do replace the existing .jar files in your project directory and/or to the PCD with the new one.
Do copy also the two files in to the S-Web editor 5.15.02 directory so that this files are also used for new projects.
This java applet version 5.15.0229 or later does contain the new certificate.

Possible workaround for applictions where any version of the IMasterSaia/IMasterXX7 applet is used.
A workaround for this problem is do change the following settings in the Java Control Panel.
The Java Control Panel can be found under Settings -> Control panel of the Windows operating system.
On the folder 'Advanced' so select the option 'Security, Mixed code (sandboxed....)' to 'Enable - hide warning and run with protections'
Close the browser and re-open the browser. 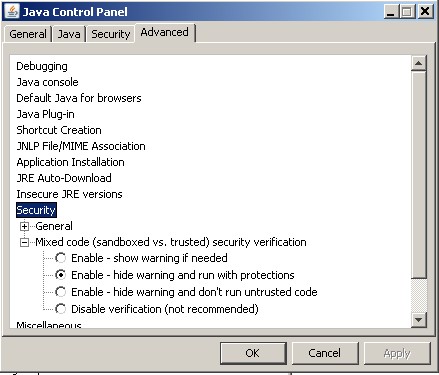 Remark
The same workaround is also available for Mac Computers which have Java from Sun Microsystems installed. 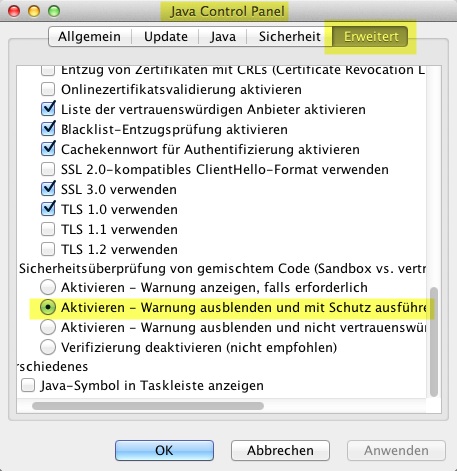