In a Web Editor project with HDLog File macro the following error messages appear during the connection to the PCD Webserver:

Symptom
The Applet tries to load the csv-file of the actual day from the Web-Server of the PCD by means of HTTP protocol. The Web-Server can't find the requested file and replies with "File not found". The applet counts 30 days back and asks for these files. None of the files can be found. The webserver can't find the file of the actual day although it is visible with FTP access. 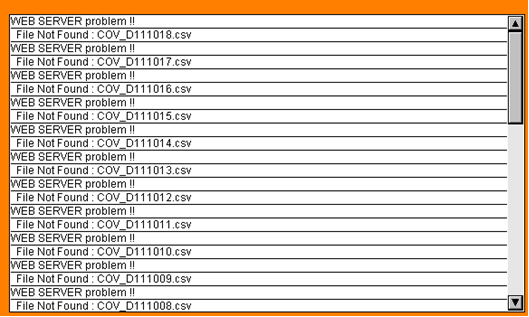 Reason
This happens in case the file system has just been formatted with the Memory management FBox before. In this case the Web Server does not know that it shall re-search the folder on the formatted flash.

Solution
After formatting the file system with the Memory Management FBox it is necessary to switch off / on the PCD (remove 24 V). For PCD3.R600 flash memory modules there is also another solution the SD-card can be removed and reinserted. After this operation the files can be seen again by the Web-Server and the error message from the Applet will disappear.

Note
There could be other reasons for the same behavior of the Applet. (Error messages File not found). But in these cases the file would not be visible over FTP. It may be that the command for the WriteFile operation was not yet given or there were other errors with the File writing operation (e.g. Flash device not present)

This inconvenience will remain on FW versions <= 1.16.xx but it will be corrected for future firmware versions. It won't be necessary anymore to switch off / on the PCD.