Why is the warning 'Saia PG5 file associations are not for this PG5 version' showed in PG5 2.1? Why the F-Box installer of PG5 2.0 is open instead of the PG5 2.1 by double-clicking on a F-Box library installer?

From Saia PG5® version 2.1, it is now possible to install several different versions of the PG5 2.0 or 2.1 on the same computer, but only one version can be the "active version".

The active version is shown in the "Current active PG5 version" field on the PG5 Version Selector window.
The active version is the version registered with Windows to open the registered file types, see file associations below, and is the version that add-on tools will assume if they are opened in stand-alone mode. A list of all the PG5 2.0 and 2.1 versions found on the computer is shown in the "Select a PG5 version to activate" drop-down list.
To activate a different version, just select it in this list and press the "Activate" button. Thus updates the master entries in the Registry, and assigns the file associations to invoke the correct versions of the applications.

By starting the PG5 you get immediately the warning: "Saia PG5 file associations are not for this PG5 version." 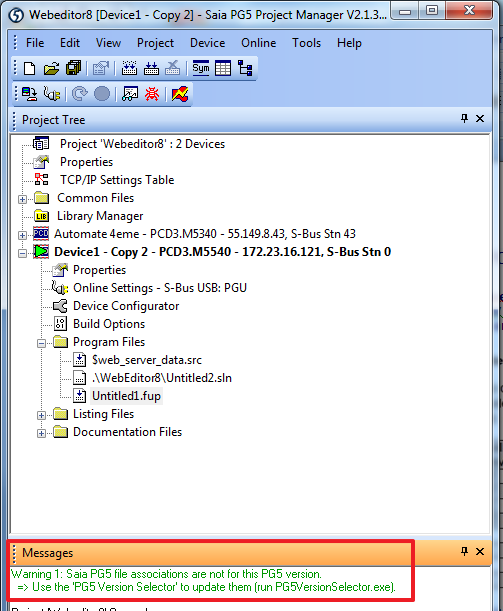 After opening the PG5 Version Selector you can choose which PG5 Version you want to use per default. 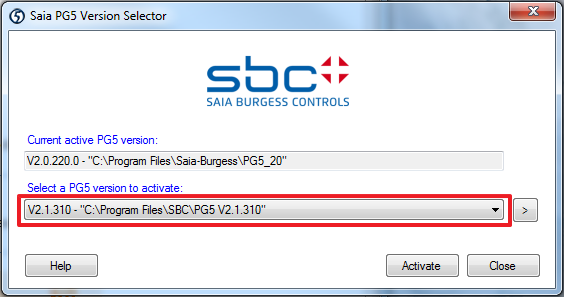